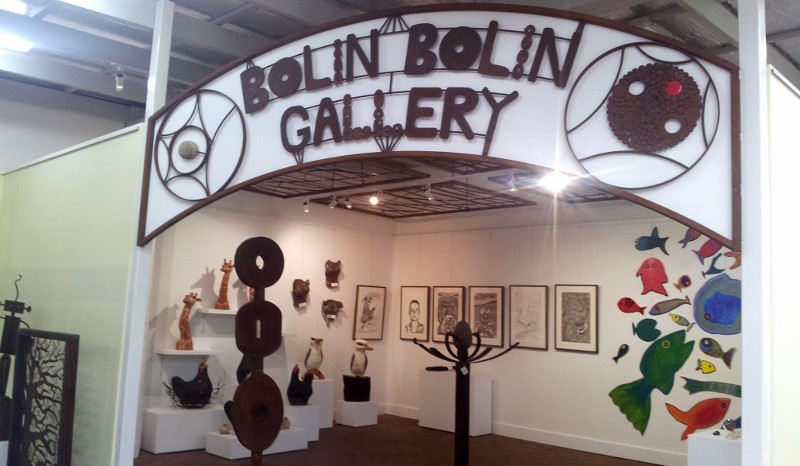 An exhibition to celebrate the Bolin Bolin Gallery’s 20th birthday and a new gallery.


BAAG has always aimed to meet the community’s needs in its own unique way, and just over 20 years art became an important part of this process. BAAG is situated in an area with a rich art history and tradition, being the birthplace of the Heidelberg school artists, and just around the corner from Heide, which was so important in the development of Australian modern art. There are also many practising artists living and working close by who need somewhere to exhibit and sell their work. 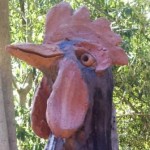 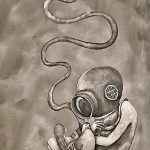 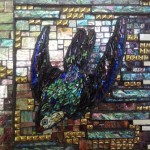 We have invited a few artists to take part in this first exhibition in the new Bolin Bolin Gallery to represent the many artists who have been important in developing art at Bulleen Art & Garden. These artists have been involved in one or more of the following: planned and run the gallery, created permanent artworks, exhibited in the gallery, sold their art in the shop and nursery, run workshops.

See below for more information about these artists.

Bolin Bolin Gallery was established nearly 20 years ago at the urging of staff member, Claire Nailer. Since then 7-10 art exhibitions have been held every year and many hundreds of artists have been involved. You can find out more about the early days of the allery at https://gallery.baag.com.au/?p=2414

This year we have decided to update and move our gallery space next door, with the old gallery being used to display garden art. You can see the progress of these renovations at https://gallery.baag.com.au/?p=2443 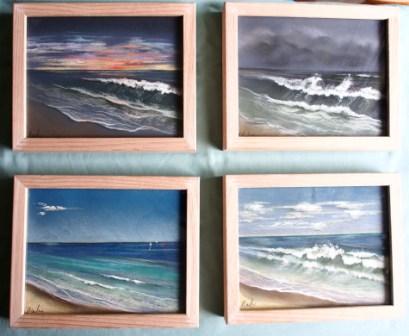 Claire was a creative force with her displays at BAAG in the days before the bolin Bolin Gallery. She  first suggested that we have a gallery and had a big role in setting it up.
Claire describes herself as a hybrid.  Following a Mature Age Degree majoring in Environmental Sculpture ( garden design ) she has worked in theatre costume for Melbourne Theatre Company, taught art, and worked at Bulleen Art and Garden for many years with plants and shop displays, an experience she found extremely satisfying .
Melbourne Weather For Beginners !
The four small pastel sketches together make up one work – suggesting a tilt at the vagaries of Melbourne weather patterns.  A kindly one however, as Melbourne is my city and I love it !
Claire Nailer. 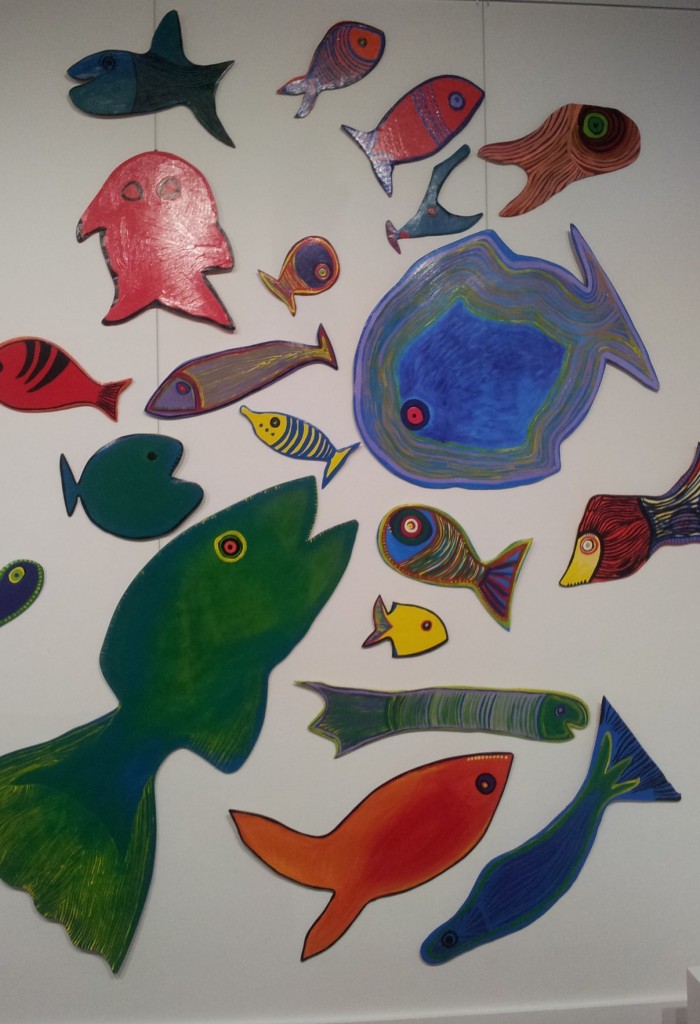 Jodie has created many of the permanent art features to be found at Bulleen Art & Garden such as the Dinosaur Mural and the Yellow mural, while working at BAAG while an art student. She has also exhibited her art in solo and group exhibitions. Jodie is currrently living in Sydney, but keeps in touch with BAAG and has been responsible for some of the very distinctive graphics on the BAAG products. Read more about Jodie 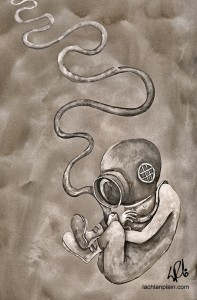 Since childhood Lachlan has lived in other worlds, on different plains, navigating them via several mediums – performance, painting and the written word.

The limited edition prints exhibited here are taken from The Lost Journals of Pedro Piscator and other tales, an eclectic illustrated collection of tall tales, winner of the 2012 Impress Prize. These images have also formed the basis of several murals, including The Final Voyage of Pedro Piscator (2012) here at Bulleen Art and Garden.

Lachlan has had a long association with Bulleen Art & Garden – he first started doing chalkboards at the age of ten! He has completed a number of murals and sculptural features at BAAG, including the Still life With Fruit” sculpture, “Pedro Piscator” mural, “Rose the Turtle”, the Yellow mural sculptures at the entrance. He also had a solo exhibition at Bolin Bolin Gallery in 2002 and curated exhibitions including Sanctum Theatre’s Conservatory of Singular Specimens in 2012.

He is also artistic director of Sanctum Theatre, a visual performance company presenting folk theatre in everyday spaces since 2006. He has recently teamed up with Magic Lantern Studio to present puppet shows at festivals around Melbourne. And he occasionally tours Australia and the world for the Snuff Puppets, an irreverent and scatological giant puppet company.

Read more about Lachlan. or www.lachlanplain.com 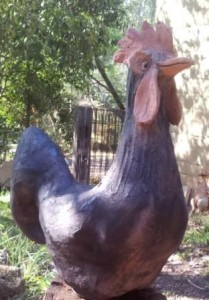 Meredith has been selling her ceramic garden sculptures at Bulleen Art & Garden since her hobby became her new career in about 1990, including a regular display in the shop, a couple of solo exhibitions and taking part in most group exhibitions. She helped Claire set up the gallery and has been managing it ever since – liaising with artists, organising, promoting and setting up exhibitions. She has also made some of the more permanent artworks at BAAG, including the   3 dimensional ceramic mural at the front of Bulleen Art & Garden, Possum Slide , and the new chooks overlooking hte entrance. And she has taken ceramic sculpture workshop since about 2000.  More about Meredith or go to www.meredithplain.com.au

Giuseppe Raneri has had a career as a recognised ceramic artist, but has also made a big contribution to art at BAAG. Joe has been buying pots, and also most of the art and handcrafts which give our shop and nursery it’s character since 1998. The Ceramic tiled murals at the Bulleen art & Garden  entrance are some of Joe’s artwork. He has also taken part in quite a few exhibitions in the Bolin Bolin Gallery. Read  more about Joe 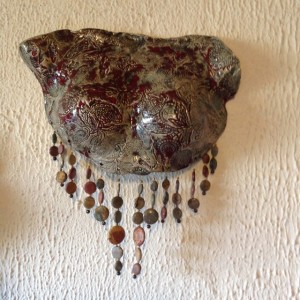 Sandra is a mosaic artist and art teacher. Sandra has taken part in many exhibitions in the Bolin Bolin Gallery and organised a couple. She has also been regularly selling her wonderful mosaics at BAAG since about 2003 and  inspiring countless people to try their hand at mosaics in her day and a half workshops since 2005. The image here is of one of her new artworks which will be inclucded in this exhibition. . Read more about Sandra

Justin is a talented and versatile artist. He is a sculptor of metal artworks and architectural details working in a ‘big old barn’ in Yarra Glen, although his first association with Bulleen Art & Garden was when some of his ceramic artworks were featured in the first exhibition in the Bolin Bolin Gallery in 1995. He has also exhibited his metal art at BAAG, including in a solo exhibition in in 2002. Justin has also been responsibl for some of the distinctive features which have been appearing at Bulleen Art & Garden such as the   Sculpture and signage at the Bulleen Art & Garden entrance, other individual signage, such as the sustainable living is Fun sign. Read more about Justin.

Nicola has made the new sign and metal ceiling which are the feature of the new bolin Bolin Gallery. She is also a regular exhibitor at Bulleen Art & Garden, taking part in a number of exhibitions with AnnMarie Gentile in 2010, 2011, 2013 and many group exhibitions in the Bolin Bolin Galllery. Read more about Nicola

There has been a continual display of Ann-Marees quirky, joyful ceramic sculptures in the BAAG shop for a number of years. She has also exhibited regularly in the Bolin Bolin Gallery – a solo exhibition in 2008, exhibitions with Nicola Hoyle, with the Box Hill Clayworkers and other group exhibitions. Read more about Ann-Maree

Images from the exhibition 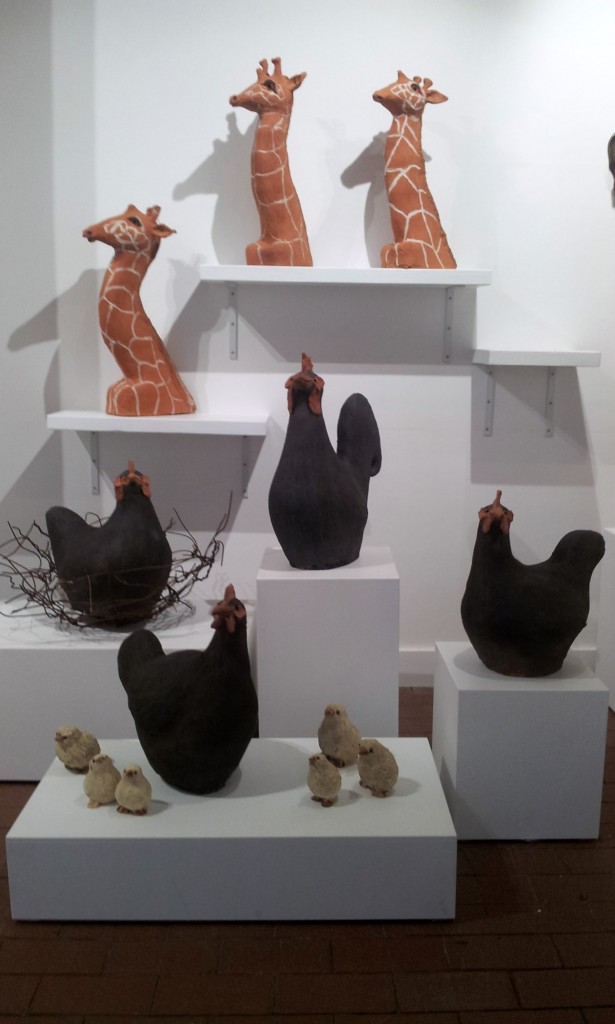 Giraffes – Some of my giraffes featured in the first exhibition in the original Bolin Bolin Gallery, “Out of the Ark” , and I decided to revisit the same subject matter, with some new giraffes,  to include in htis exhibition, as a link between the two exhibitions, 20 years on.

Chooks -I have recently taken an interest in capturing the quirky nature of chooks. As well as their interesting personalities, they have a place in sustainable food gardens. They play their part by providing eggs and also acting as living composters – they eat our scraps and provide useful manure. They eat many insect pests – but you do need to make sure they don’t destroy your seedlings. My particular chooks have been inspired by the lovely black chooks which can be seen on the green grass at Edendale farm and Enviornmental Centre, Eltham.

A hen and a rooster of mine have recently nested on a green cylinder  overlooking the Bulleen Art & Garden driveway, as a permanent artwork, a rooster is is the garden of Maria, our chook lady, and I have made a small flock for this exhibition – rooster, hens and chicks. 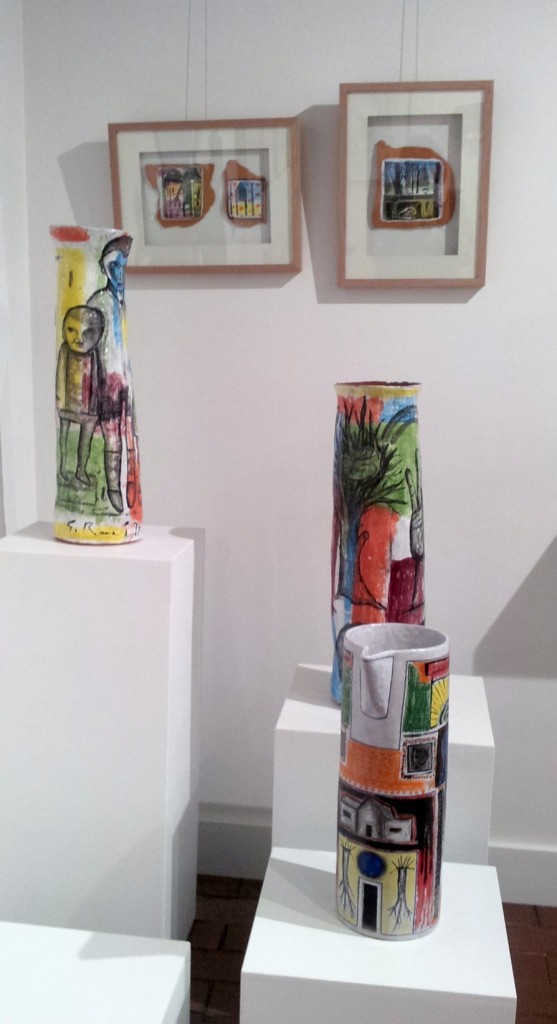 Sculpture by Nicola Hoyle, with prnts by Lachlan Plain and kookaburra by Meredith plain 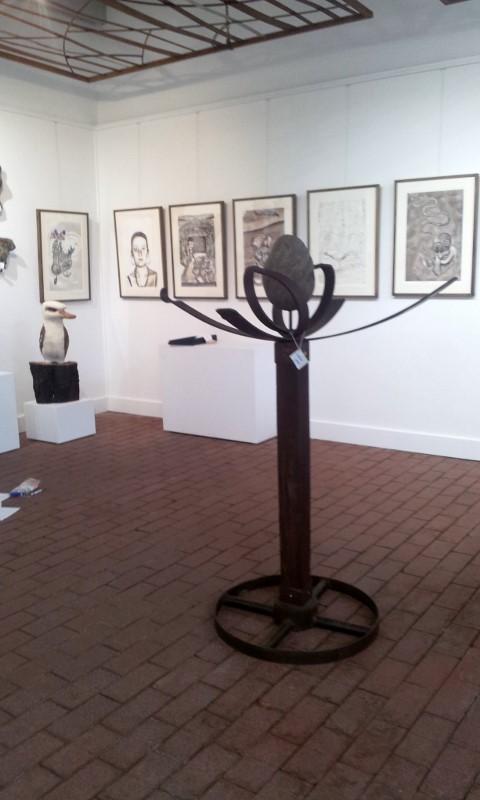 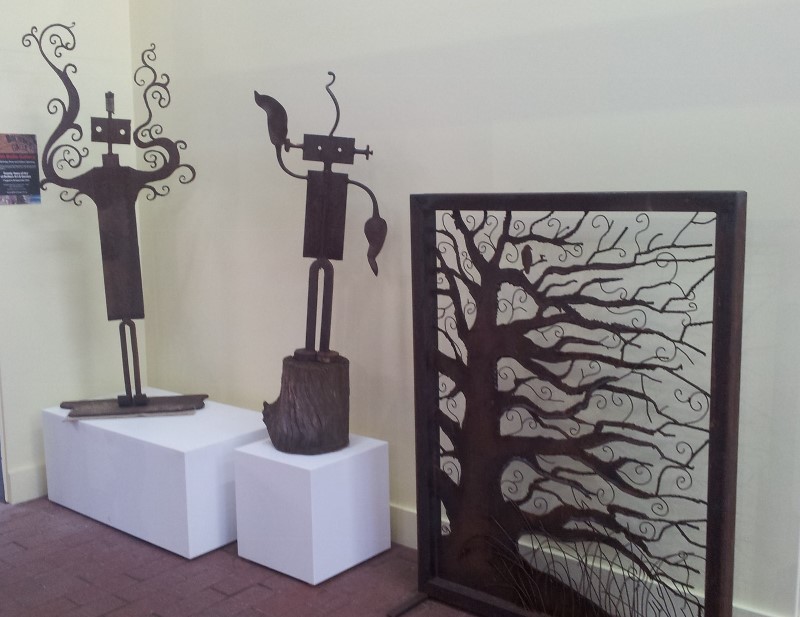 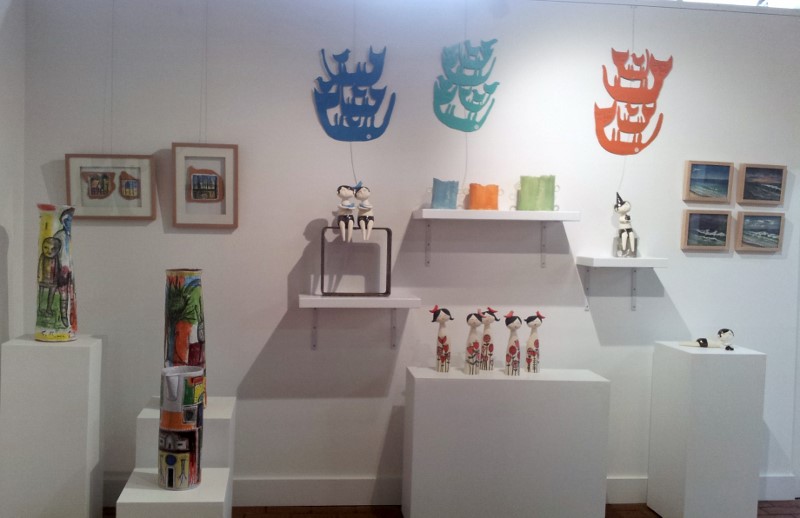 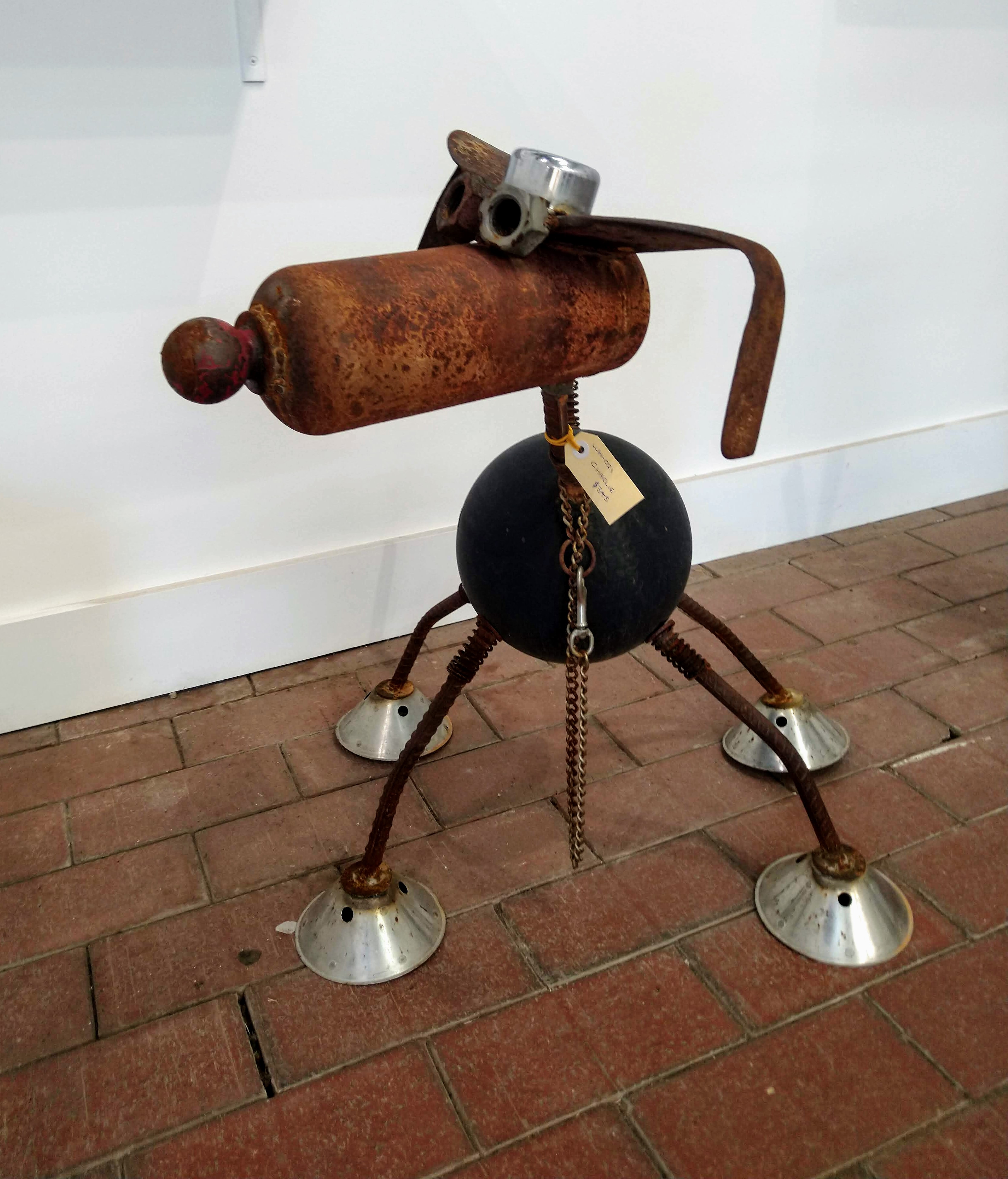